Dignity Despite the Sorrow 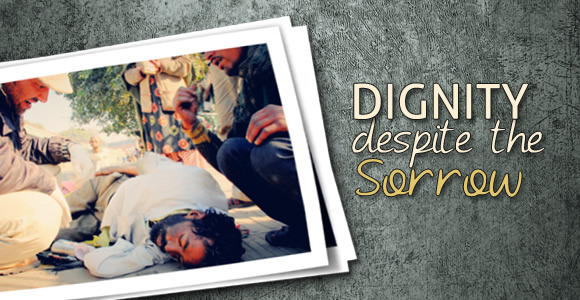 This was my first day driving the streets of Delhi with staff from Sewa Ashram, but I was already used to seeing bodies, covered by blankets, strewn about the sidewalks and parks.

Everywhere we went, 34-year-old Sarin Thapa would get out of our tiny ambulance and walk from lumpy blanket to lumpy blanket, asking whomever he found underneath if they needed any help. 25-year-old Bipul Borgohain was the driver for the day, so he and I would trail Sarin until he found someone willing to go. 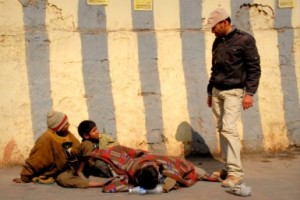 Thinking it might be a potential patient, Sarin talks with three street kids who were huddled under this blanket.

Thinking it might be a potential patient, Sarin talks with three street kids who were huddled under this blanket.

The morning was filled with false alarms, from glue-sniffing street kids angered by the interruption to other folks who simply refused our offer. Finally, we opted to grab lunch and regroup.

Then we hit more locations and at last, came across a guy ready to accept our offer. We found him in a dilapidated park, along with a dozen other men.

Sarin and Bipul walk through the gates of this dilapidated park, looking for those in need. 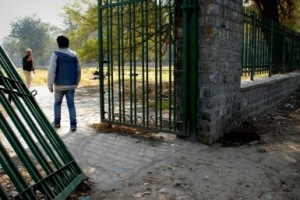 Sarin and Bipul walk through the gates of this dilapidated park, looking for those in need.

As it turns out, his history of tuberculosis (TB) was the reason for his willingness. He had been receiving TB medicine from a charitable Hindu temple for a few months, but his meds were generally the only consistent “sustenance” he was getting. So he was hungry, sick and malnourished.

We helped him to the mini-van and pointed him to a seat in the back, but not before Sarin gave him a mask to wear in order to prevent any potential TB spread in the close confines of the vehicle.

Then we were off to the next location – a forgotten sidewalk next to a busy overpass. It was there we spotted more bodies lying under blankets.

Sarin asks the TB patient about his medical history. He agreed to go with us. 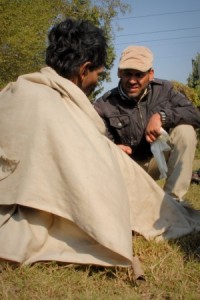 Sarin asks the TB patient about his medical history. He agreed to go with us.

After we pulled up, Sarin and I went to check on the two men on curbside mats, while Bipul ran across the street to investigate another guy he had spotted. Our initial patient from minutes before waited in the ambulance.

The first guy we talked to was an old man with no teeth who was cordial but uninterested in our offer. The second, however, was barely conscious and unable to speak. He looked about 40, and flies swarmed all around his face. Every couple of minutes, he’d make a feeble attempt to swat them away.

The tiny sidewalk vendors that operated nearby came over and insisted we take the man with us, despite his inability to consent. But one look at the guy, and we could see he was in desperate need. His breathing was labored, his body was lifeless and his half-closed eyes were vacant.

Finally, a few sympathetic bystanders helped Sarin load the man into the ambulance next to the TB patient, who looked a bit unnerved by the new passenger. Just then, Bipul carried over the man he’d been attending to across the street…an old timer who was naked below the waist and barely conscious. He was the most emaciated person I’ve ever seen – a living skeleton with skin.

Sarin (left) and a bystander discuss the needs of the 40-something man found here on the sidewalk.

They laid him on the bench, with a small yellow tarp that was supposed to cover his lower half. It didn’t. But with everybody loaded, Sarin jumped in the back with the three 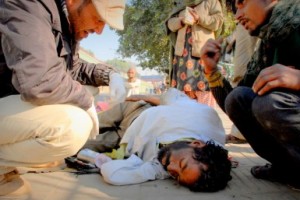 Sarin (left) and a bystander discuss the needs of the 40-something man found here on the sidewalk.

patients, and we hit the road back to Sewa Ashram.

The ambulance smelled rancid…a pungent mixture of sickness, decay and human waste. We rolled all the windows down to keep clean air circulating, but the back windows were pulling in all the fresh air, which pushed the noxious air back up to the front. I tried to get my head out the window for some fresh air, but it was no avail. The smell was so strong, I could nearly taste it.

After loading everybody into the ambulance, Sarin keeps an eye on the three new patients. 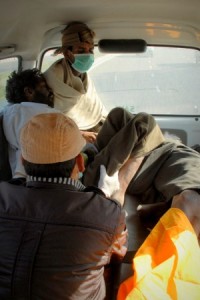 After loading everybody into the ambulance, Sarin keeps an eye on the three new patients.

With siren blaring and red light flashing, we raced through Delhi traffic as best we could. It was stop and go, however, and after a particularly hard brake, I heard a commotion behind me. I looked back to see the 40-something man crumpled on the floor at Sarin’s feet. Apparently, during the brake, his limp body had lurched forward, sliding off the chair and into Sarin’s arms.

I was worried for the man, knowing time was of the essence. He needed serious medical attention, and he needed it now.

As we neared the Ashram, Bipul turned to me and spoke casually.

The news had trouble registering, and my mind raced in disbelief.

Once we pulled through the gates of Sewa Ashram, staff members came out to meet us and take charge of our passengers. Meanwhile, Sarin squeezed himself out from beneath the weight of the deceased patient.

The old man was quickly put to bed upon arrival.

The other passengers were helped inside. The able-bodied TB patient was given a cup of chai, and the old man was given an IV and put to bed. 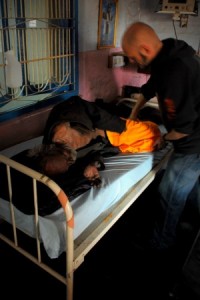 The old man was quickly put to bed upon arrival.

They took the deceased to the makeshift chapel, where he was wrapped in the traditional Hindu manner – white cloth with flowers placed on top. He would be cremated the next day, in keeping with that same tradition.

A few hours later, I put my arm on Sarin’s shoulder.

“How do you deal with the burden of days like this?” I asked, shaking my head at the weight that still lingered in my mind.

“Well, I’m just thankful I was there,” he replied matter-of-factly. “I’m happy that we were able to let that man know that people cared for him, even if it was in the final minutes of his life.

“We gave him dignity.”

If anybody should appreciate that significance, it’s Sarin. He was once a patient too. And he’s not the only one. Nearly every staff member at the Ashram is a former patient, and most were found on similar sidewalks in the same city.

Staffers prepare to move the man’s body from the ambulance stretcher to the white burial cloth. 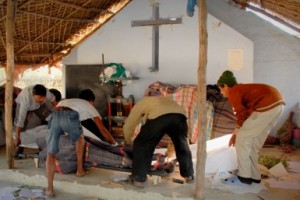 Staffers prepare to move the man’s body from the ambulance stretcher to the white burial cloth.

They, more than anyone else, understand the plight of these patients. They’ve experienced their own hardships. They’ve seen plenty of death too. And their empathy and compassion for others now run deep. They understand the crucial role that dignity plays. If it’s given in death, staffers are thankful for the opportunity to provide it.

More often than not, however, this dignity is provided in life…in the ongoing rehabilitation of patients’ whole being. Their bodies are healed. Their spirits are renewed. And they’re given value and self-worth most have never known.

While the day’s events still linger in my mind, Sarin’s words echo much louder. My sorrow has been replaced by contentment.

Despite the death I witnessed today, love and hope are alive and well here.