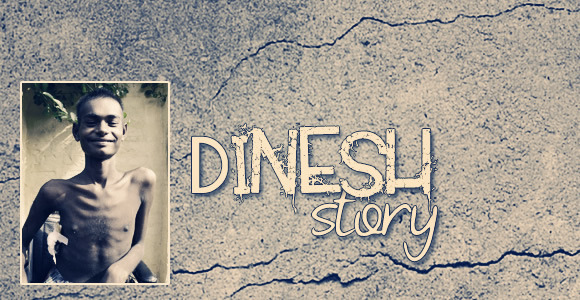 Dinesh parked his rickshaw in the shadow of a tree. He had no strength left, no breath. For more than five months he was coughing up blood. His lungs seemed filled with water. Appetite had left him long ago, no need to for food. Dinesh placed the seat of his rickshaw in such a manner that he could sleep on it and then closed his eyes. He had nearly dozed off when a sudden jolt threw him from his seat. Lying on the ground he saw that a car had hit his rickshaw, both wheels were smashed, the axle broken.

A violent pain seared through his hips and legs, he was unable to crawl up and thus decided that it was better to just lie down at the spot, better to just die, give it all up. It was then that we found him, this emaciated boy, 18 years old. After a bath and a haircut at the Ashram we did some medical investigations and soon found out that he was suffering from TB and pleural infusion. The day after he was admitted in the Intensive Care Unit of St. Stephen’s hospital. Five liters of pus was drained from his lungs and further surgery is required. However, Dinesh is too weak to undergo such a serious medical procedure. After one and a half months he was discharged from the hospital and came back to the Ashram in order to gain weight, he only weighs 37 kilo. I remember how scared he was when he arrived; he earnestly feared for his life, there was no improvement in his health yet. But love is a powerful medicine; we pampered Dinesh like a baby, tempted him with chocolate and fruit-juice, fried eggs and chicken. I sit on his bed while he tells me his story.

Dinesh is born in Bihar, India’s most backward state. When he was two months old his mother died. His father was an alcoholic who would beat him and his brother mercilessly. When his father married again he left his two small sons by grandmother who was living in a slum-hut. In poverty Dinesh was brought up, never enough to eat, no education. His elder brother left Bihar to never return. When Dinesh was 10 years old, his grandmother was poisoned by her greedy daughters-in-law. Dinesh left Bihar in shock. Arriving in Delhi he served at tea-stalls, cleaning plates and cups. By the age of fifteen he became a rickshaw-driver. Most of Delhi’s cycle-rickshaw drivers are homeless and use the money earned by their labor for drugs and alcohol. It is a tough life, not many of them survive beyond 40 years. Tuberculosis and HIV is rampant among this particular group of people. Their bed at night is the seat of their rickshaw, these guys are pretty much 24 hrs a day on a rickshaw, they live and die on a rickshaw. I pray Dinesh will never need to drive such a trap again. We pray that Dinesh will receive life, overflowing.

Sewa Ashram is the main project of Delhi House Society, a Christian Humanitarian Development organisation that has been faithfully working with the poorest of the poor in Delhi for more than a decade.
View all posts by Sewa Ashram