Love of the Father 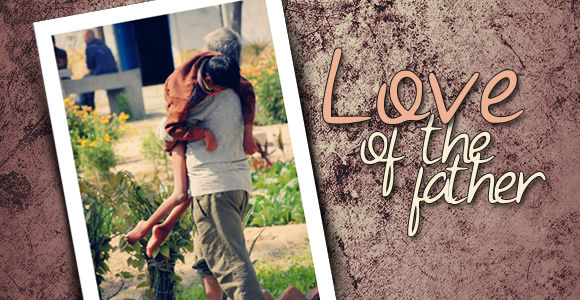 I met him the first night I arrived at Sewa Ashram. His smile was constant, and contagious. There didn’t seem to be an unhappy bone in his body. He came up and gestured to his lower back and mumbled something in Hindi. I understood none of it, but a staffer standing nearby deciphered for me.

“That’s Babli (Bubbly),” she said. “He is special needs. He also has back pain, so he’s showing you his where his back hurts. That’s a sign he trusts you.”

Then he rubbed his rotund belly for a little while and ambled off.

“He likes showing off his belly too,” the staffer added.

The guy instantly rose to the top of my list of likeable people here at the Ashram.

The next day, I saw Babli again. Only this time he was carrying a boy in his arms who was naked below the waist. The child, who looked to be about 12, was also special needs. And as Babli clutched him against his body, the boy’s legs dangled beneath him in a contorted position.

Nearly every day, Babli can be seen carrying “his son” to and from the shower. 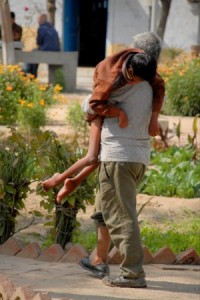 Nearly every day, Babli can be seen carrying “his son” to and from the shower.

I continued watching him as he lumbered over to the patients’ bathing/bathroom area and held the boy up as a staffer washed him. Then, Babli wrapped him in a towel and carried him back to the other side of the Ashram compound, grinning the entire way.

Soon enough, I was seeing the two daily. Throughout the day, the boy would lie on a woven cot tucked in between two buildings near the back wall of the Ashram. Babli would always sit on the same cot, smiling at the world and occasionally wiping drool from the boy’s mouth.

In general, the boy seemed unable to move much. His arms were mobile, though the movement was limited. He also couldn’t speak, but he would occasionally make guttural moans and squeals.

The first time I passed by their quiet corner, Babli saw me (and my camera) and motioned me over.

“Alright buddy, I’ll take your photo!” I replied, knowing the lighting was horrible and the photo would probably go in the junk folder…and also knowing he understood none of my English.

Preet sits on his cot throughout the day, and Babli is never far away.

He grabbed the boy under the armpits, propped him up and turned his chin to face the camera. Babli wasn’t interested in his own photo, only the boy’s. 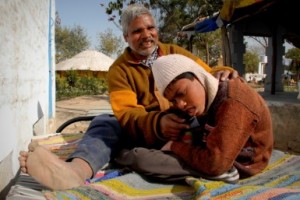 Preet sits on his cot throughout the day, and Babli is never far away.

I snapped the obligatory shots and showed the photo to Babli to prove I took it. He pushed the camera down to the boy’s face, so he could also appreciate the shot. I patted Babli on the back as a goodwill gesture and shook his hand. He pulled my hand down to shake the boy’s as well, despite the drool that soaked it.

I felt a twinge of guilt for my insensitivity. Who am I to assume what the kid can process and appreciate? This was my first lesson from Babli.

Each time I pass by, Babli insists I take a photo of Preet, and sometimes, I get a smile 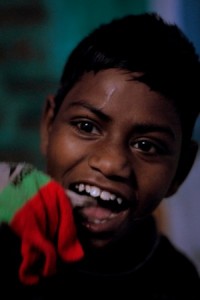 Each time I pass by, Babli insists I take a photo of Preet, and sometimes, I get a smile

By now, I felt compelled to find out what the story was behind these two. Who is this guy? And who is this kid? What’s the dynamic there? They seemed joined at the hip.

This is where Preet has lived for years now. He’s completely dependent on others for his every need, and he will be for life.

His parents dropped him off at the Ashram years ago and haven’t been seen since. According to Hindu tradition, the boy is a direct result of bad karma – the punishment for something done by the parents. The stigma had to be eliminated, so the boy was abandoned…out of sight, out of mind.

As for Babli, well, he’d been picked up months earlier with serious skin infections in his foot. He lost his big toe as a result, and the others are now misshapen.

“At that time, Sewa Ashram had a special needs facility, which housed adults and children,” staffer Bipul explained. “So Babli was living there.”

Babli takes care of Preet’s every need, from bathing to feeding.

When Preet arrived, they placed them in the same living area together. 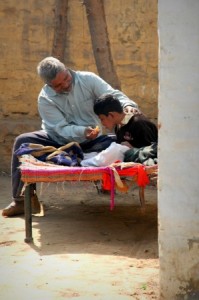 Babli takes care of Preet’s every need, from bathing to feeding.

“At first, Babli was dependent on others,” Bipul continued. “But when Preet arrived, that started to change.”

Weeks turned into months, and as time went on, Babli stopped relying on others so much. He started becoming more independent himself, and in fact, he started taking care of Preet! Little by little, Babli was becoming his strongest ally. At first, he would simply sit with Preet and talk to him. Then he started helping to feed him. Before long, Babli was clothing him and bathing him.

Nearly every waking hour is spent together, and since they’re still roommates, every sleeping hour is too!

“The two are inseparable,” explained Keshav Dutt Pandey, the Ashram’s director. “It’s a real love story. [Babli] treats him like his own son.”

Babli’s life is wholly focused on this “adopted son” of his. Every need Preet has is met by Babli.

And the love they share has humbled me since I arrived here at Sewa Ashram.

Babli’s love for Preet gave me a taste of the unconditional love we all receive from our Father.

In our humanness, we prefer our love to be reciprocal. We want the object of our affections to return the favor. It helps affirm our own feelings, and it quells our earthly insecurities. 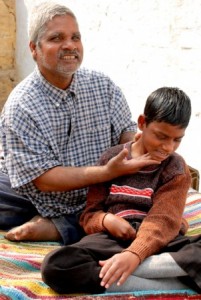 Babli’s love for Preet gave me a taste of the unconditional love we all receive from our Father.

Babli loves Preet. And by conventional standards, he receives little in return. But his love is unconditional. By earthly standards, this helpless boy is weak. He has nothing to offer the world. He can do nothing on his own. He is completely dependent. Yet Babli’s love is unfailing, and its origins are Divine.

As the weeks have gone on, Babli now stops me every time I pass by.

And each time I take their photo, I show it to him, and to Preet. Then I pat him on the back, and Preet. I shake his hand, and Preet’s.

Babli’s eyes always beam, just as any other proud dad’s should. They radiate the unconditional Love we’re all blessed to share – the love of our Abba, Father…better yet, our Dad.