The Transformative Power of Compassion 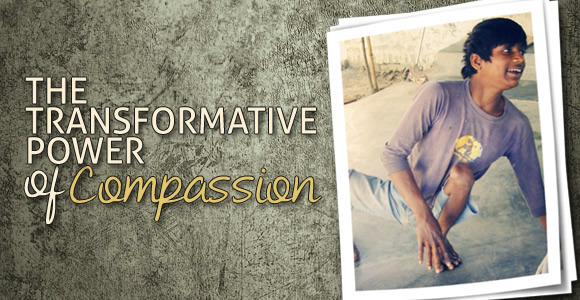 My mind has trouble reconciling the contrasting images placed in front of me. The photos, taken years apart, don’t even look like the same people, but they are.

They’re people I’ve been hanging out with for weeks now. They’re familiar faces, but I can barely recognize them from those old photos. Their demeanor is night-and-day different. The flesh on their once-skeletal frame is now filled and full of vigor.

What a difference love makes!

The day I drove the streets of Delhi with Sarin and Bipul was the same day I learned Sarin was a former patient at Sewa Ashram. But he’s not the only one.

This former patient is now serving as a medical intern in the clinic. He helps with patients’ treatment and records. 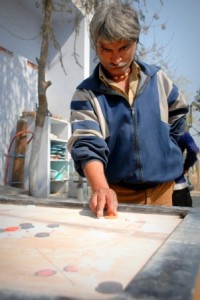 This former patient is now serving as a medical intern in the clinic. He helps with patients’ treatment and records.

Of the 27 members of the Ashram staff, 25 are former patients who were rehabilitated from the dire conditions of the Delhi streets. The transformations are truly remarkable.

Nearly every story I’ve heard involves three factors – serious illness, abject poverty and utter desperation. The patients that arrive at Sewa Ashram are not coming because of doctor’s orders. They’re coming because they have no doctor. They have no family or friends to care for them. They’re gravely ill, and they have no allies.

This is why Sewa Ashram was started – to shine light in the darkness of despair. In order to accomplish that mission, Sewa Ashram emphasizes total rehabilitation of the “community members” (as they’re referred to here) who come to the Ashram. 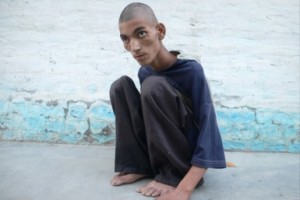 This patient was picked up about four years ago in a bad state of malnutrition and illness.

This patient was picked up about four years ago in a bad state of malnutrition and illness.

This healing takes time, however, but the staff is willing to invest.

“That’s why most of the staff are former patients. They know what it’s like, and they have a heart for the work.”

On average, patients stay at the Ashram for nine months due to the nature of their afflictions. Tuberculosis (TB) is a serious threat and requires extended treatment. Malnourishment is another, which is often accompanied by a host of other ailments. Skin infections (including leprosy) are also treated regularly, with open sores and gaping wounds that take months to heal. For many “community members,” recovery can last nearly a year.

He’s now a staff member who helps with patient care, groundskeeping and maintenance. 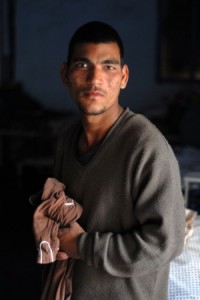 He’s now a staff member who helps with patient care, groundskeeping and maintenance.

As patients go through the lengthy recovery process, patients are put into “life groups,” which are part of Sewa’s holistic emphasis. Led by staff members, these groups serve to strengthen bonds within the community.

They tell their life stories. They speak of their struggles. They discuss their hopes. It’s an opportunity for people to restore those vital components of humanity – sociability and sense of community.

As patients continue to regain strength of body and mind, they’re also given the opportunity to start contributing to the daily functions of the Ashram. These opportunities are voluntary and certainly won’t affect treatment, but they do give the staff at the Ashram an idea of the patients’ engagement with and dedication to the greater cause.

Every single day, I see patients washing dishes. Others are doing laundry. Still others sweep the walkways, and tend the gardens, and help other patients get from place to place. The day-to-day operations of this place are solely dependent on those who live here.

Born with polio, this staffer was nicknamed “Heli” due to the fact that he would “twirl” around the Ashram on his hands when he first arrived.

Those patients who demonstrate willingness and dedication are generally those given the opportunity to become a staff member. Others simply stay on as “long-term patients,” who continue to receive treatment and live at the Ashram for years. 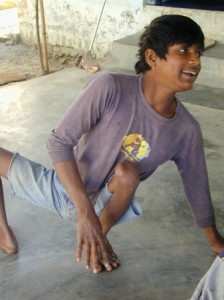 Born with polio, this staffer was nicknamed “Heli” due to the fact that he would “twirl” around the Ashram on his hands when he first arrived.

“I used to be lost,” recalled a long-term patient with HIV. “My mind had no hope. But this community has saved me. I was slow to help out around here, but now I’m helping. And I have a new hope in life.”

Sewa Ashram is truly a place of hope. It’s an organization that restores the human body and spirit, providing a renewed sense of place and purpose – universal elements of human identity.

“I thought I was going to die,” an older community member stated. “I was sick. I couldn’t walk. I had no hope.

“But now, I’m walking again. I’m working here. And it’s all by the grace of God.”

He now helps in the gardens; he helps tend to the rabbits that reside here; and he helps cook food.

He has since had multiple surgeries to correct his legs. He’s also completed a degree in Bible training and hopes to become a pastor one day. In the meantime, he helps with laundry duties, among other things.

Every one of these patients and staff members understands the vital importance of purpose, not only in the social and mental context, but in the spiritual as well. And here at the Ashram, that multi-faceted purpose is just as important as the medical treatment provided. 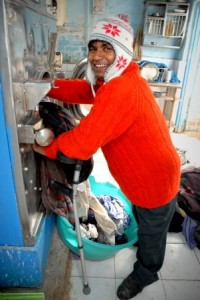 He has since had multiple surgeries to correct his legs. He’s also completed a degree in Bible training and hopes to become a pastor one day. In the meantime, he helps with laundry duties, among other things.

While the rest of the world may have discarded these human beings, allowing them to vanish into the fringes of the forgotten, Sewa Ashram is walking straight into those fringes and finding the lost.

The staff members here were once forgotten too, and somebody found them. Somebody provided love, compassion and dignity to them, and they’re now doing the same for others. The old cycle of destitution has been transformed into a new cycle of restoration.

I look around me and see people who were once mere shells of their current selves. I see them helping others through the same difficulties of life that they once experienced. I watch them giving the same compassion and dignity to others that they were once given.

“I have a new hope in life,” the HIV patient concluded. “And we all need to do the same for others.”

This new cycle of restoration inspires me. The passion I see all around me is contagious. And the willingness to spread this sense of hope pushes me to do the same, in big ways and small.

My own efforts may be seem insignificant and easy to overlook, but each one adds up. And along the way, lives are changed, even if I’m not around to see the end result…at least not in this lifetime.